How our phones disconnect us when we’re together 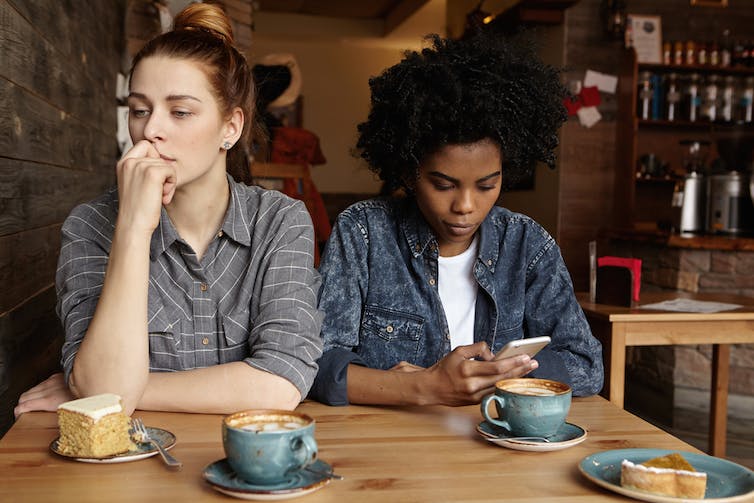 Smartphones have changed the world. A quick glance around any street or communal space shows how dominant our favourite digital devices have become.

We are familiar with the sight of groups of teenagers not talking, but eagerly composing messages and posts on their screens. Or seeing couples dining silently in restaurants, ignoring the romantic flickering candle in favour of the comforting blue light of their phones.

Attempts have been made to come up with rules of phone etiquette during face-to-face interactions. But why do these devices that are meant to connect us when we’re far apart seem to cause so much division when we’re close together?

Some research has begun to examine this question. In one 2016 study conducted in US coffee shops, researchers found that using a mobile device while spending time with someone reduced the ability of one conversation partner to properly listen and engage with the other. This effect was particularly strong when the people interacting didn’t know each other well.

In another more recent study, researchers told restaurant goers to either leave their phones out on the table or to put them in a box, out of reach and sight. At the end of the meal, participants were asked how enjoyable the meal was and how distracted they had felt.

People who had their phones on the table felt more distracted, which in turn led to lower enjoyment of their time spent eating with friends or family.

My own research has also delved into the topic of phones distracting from high quality face-to-face interactions. In my study, I invited pairs of friends to come to the lab to take part in an experiment and then asked them to wait for five minutes sitting side by side in a waiting area while I printed out questionnaires.

This was actually a deception. I was only really interested in what they would do during the five minutes of “waiting time”, so I secretly filmed them to see what they did. I then asked them to complete a questionnaire on how well they thought that period of interaction had gone.

Finally, I disclosed to the participants that they had been recorded and asked for permission to keep the tapes to analyse in our study. Everyone allowed us to keep their videos (even the pair who had criticised my outfit when I left them alone). Then with the help of my research assistants, we watched all the videos to see how much each pair of friends had used their phones.

We found that 48 out of the 63 friendship pairs used their mobile phones, and on average they used their phones for one minute and 15 seconds out of the five-minute period. We calculated these averages based on both friends’ behaviours because interactions are dependent on both people who are present. So even if only one person used their phone, we would still expect their phone use to influence the quality of the interaction.

The longer they spent using their phones, the lower the quality of their interaction. We also found that regardless of how close the friends were, they all had worse interactions when they used their phones.

Watching the videos of friends using their phones taught me a lot about why they can be such a problem in face-to-face interactions. On occasion, the phones were used to share information, like showing a picture or email that they wanted to discuss. These types of usage didn’t seem to hurt their interactions, but they also didn’t happen very often.

Only 21% of people used their phones in this way and on average the sharing only lasted five seconds. What happened more often was what I refer to as “distraction multitasking”, when friends were listening with one ear but still looking at and thinking about what was on their phones.

This type of use made up the majority of what we observed on the tapes. One particularly sad clip I will always remember was between two female friends. Both friends were getting along well after I left them alone, and then one of them got out her phone.

In the meantime, her friend had thought of something she would like to say and looked up eagerly about to share perhaps some gossip or good news. But as soon as she saw that her friend was completely absorbed in her phone, she looked away, disappointed and hurt. They didn’t speak again during the waiting period.

This seems to me to be the biggest problem that phones create in face-to-face interactions. They make us less available to others by distracting us from important social cues, like that light in a friend’s eyes when she has something important to tell us.

While technologically mediated conversations can be useful to maintain our relationships, most of us still prefer face-to-face interactions to bond with our friends. Face-to-face conversations can feel safer for sharing intimate information – like things we’re worried about or proud of – because they can’t be saved and shared with others.

Being physically present also allows for physical contact, like holding someone’s hand when they’re scared or giving them a hug when they’re sad. When someone is focused on their phone, they may miss out on opportunities to give this kind of support.

The best phone etiquette to remember is that phones are meant to help us connect with our friends and family when they’re far away. When they’re right in front of us, we should take full advantage of the opportunity to connect in real life – and leave our phones alone.

Genavee Brown, is a Lecturer in the Psychology Department and a member of our Evolution and Social Interaction Research Group

This article is republished from The Conversation under a Creative Commons license. Read the original article.

View all posts by northumbriapsy